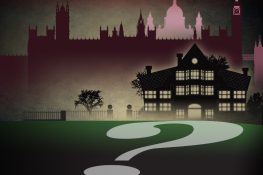 The Game is afoot!

There's been a murder at the magistrate's mansion and it's up to your students to discover who caused his death over dinner and possibly poisoned his pudding!It's time to investigate the Victorians in an all new exciting way as you delve into the past. Lets to find out which of the victim's family decided to do away with the mean old magistrate. Unfortunately, none of the suspects are available for questioning. Luckily there is help at hand in the form of his servants. The butler didn't do it but find out what he saw along with the cook, gardener and kitchen hand and you may be able to uncover the clues to solving this confounding crime.

The investigation begins with the introduction of the four witnesses. Who are they? What did their jobs entail? Can they help you with discovering motives for the suspects? Why was the magistrate eating in the basement? Does anyone care what the body looks like? And Why was there so much poison in the house? They have a wealth of fascinating facts about the Victorian era that may or may not help you uncover the truth.The servants have also gathered evidence from the crime scene for your budding detectives to examine. Can they identify the Victorian items and what they were used for in order to discover which of the suspects visited the victim last night and committed the crime?With the suspects not being with us it might be difficult to identify them when the time comes to make an arrest. Don't worry! Victorian policing saw the advent of mug shots and using the descriptions provided by the servants you students will create wanted posters to aid in the capture of the criminal whilst learning all about what fate may await the scoundrel when they are finally captured and suffer Victorian justice.When all the evidence is gathered, the investigators get one final chance to question the witnesses about anything they want. It could be about the crime or anything at all to do with life in Victorian England. Our servants know a lot and are more than happy to share their knowledge.

After writing down their findings it's time for the solution to the crime to be revealed! Were your students super sleuthing Sherlocks or did they have no idea what the Dickens was going on. Either way, they'll have discovered more than just a killer in this wondrous workshop. They know as they return to their normal lives filled with vivacious Victorian facts.
More Information & Send Inquiry »