Face painting Sheffield creates a fantastic ambience for a themed party. All the children genuinely feel as though they are part of the squad. One great quality of Face Painting Sheffield is they understand that some children find it uncomfortable when they wear face paint that covers their whole face. Therefore, they do half-face face paint (see the photo below for what we mean). They also allow the children to become creative when creating designs. Chase from the paw patrol inspires the photo you see below.

As you can see from the picture, the face paints done to match the headband of the birthday girl. The headband set can be bought from Amazon and given to the guests on arrival. The head decoration can be used both as an ice breaker for when children come in and part of the gift bag at the end of the party.

Making sure the birthday boy/girl has a fabulous outfit is all part of the fun (and the guests have cool costumes). Depending on the budget for your birthday party you can provide paw patrol tops, watches or even some simple headbands!

Start by cutting out as many triangles as you want. On each triangle paint it a themed colour – blue, red, yellow and green. Thirdly, write on a birthday

message. An example could be “Birthday Party”, “Paw Patrol Party” or the birthday child’s name.

Photo booth – A photo booth is super fun and looks great on Instagram. Cut out a large rectangle with a thick border of around 15cm. On this border, you can print out photos of the birthday child, paw patrol pictures and the age they are turning.

A finger food desert – paw patrol cookies (an activity for children swell).  After making the basic sugar cookie dough, use the cookie cutter, cook and leave to cool. The last step is optional, whether you would prefer to colour the cookies in yourself or set up a cookie colouring station for the children to do!

Similar to the traditional game of ‘Duck duck goose’ but this time Paw Patrol theme. We chose this game as it is not a competitive sport and gets the children moving outside. To play the game:

All the children need to sit in a circle, and one child taps everyone’s head saying Paw. After a bit, they will say Patrol instead of Paw. The child who was chosen (they had been tapped on the head and said ‘Patrol’) chases the one talking, and if they touch the talker, they sit back down.

Paw Patrol is an animal theme party. The workshop Animal Club workshops could bring real-life animals which are allowed to be held. It will be a loving memory for the children. All the children have a choice if they want to hold the animals as the animals get past the round the circle.

A meet and greet is a thing all the children will love because they will be allowed to play games with the paw patrol dress up and take lots of photos. The children will think that they have met the actual character and can ask questions. 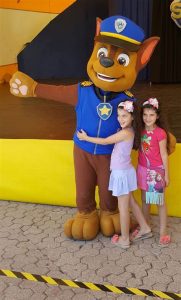