If you want to explain robotics to kids start by simply telling that robotics means developing robots. Robots are the human-made machine that is programmed to replace people in different areas of work. Humanoids are robots that look and act like humans. However, most robots do not look like people and only can do what they are built to do. 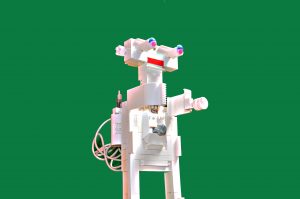 Robotics has been a buzz word in the world of cutting edge learning for a while. It often comes up in reference to STEM (science, technology, engineering and mathematics) subjects. Many teachers, however, may not fully understand themself how to explain robotics to kids. This blog explains robotics and looks at how to bring this important to the future of humanity concept.

What is a Robot?

To explain robotics to kids, we first need to understand what is a robot. A robot is a human-made and programmed machine that does what a person can do. Many people think of robots as machines that look and act like people. The robot played by Arnold Schwarzenegger in the classic 80th si-fi films The Terminator is an ultimate example of such a machine (well, at the film’s point of time). In the movie, Terminator is a robot that looks like a human and can outsmart humans. However, in reality, most robots do not look like people and only can do what they are built to do.

Robotics is a relatively newly developed filed that brings together science and engineering. Robotic specialists design, construct and use robots (human-made machines) to carry out traditional human tasks. Robots already replaced humans in many industries where there were a lot of simple and repetitive tasks. Examples of robotics application are car and consumer goods manufacturing, jobs in dangerous for humans places.

What are the different types of robots?

Here are 13 types of robots as listed on Robots website:

Aerospace robots (aka flying and space exploration-related). NASA’s Mars rover and Robonaut are examples of these.

Consumer robots. Anything from a vacuum, robotic kits and toys such as Meccano Max http://max.meccano.com/ buy plus emerging AI-powered robot assistants.

Disaster Response. These are Robots that help to work in the aftermath of large scale disasters. They help to search for survivors or inspect dangerous to human places such as nuclear power the plant.

Drones (aka unmanned aerial vehicles). Toys, military surveillance systems like Global Hawk and stunning drone fireworks displays. The deas for usage continues to emerge. So watch the space there.

Education. Next-generation of robotics for use at home or in classrooms.

Industrial. Robot manufacturing factories are already a full reality. Now the robots are moving into warehouses and starting to work collaboratively alongside human workers in many factories.

Military and Security. Military robots include ground systems like Endeavor Robotics’ PackBot, used in Iraq and Afghanistan to scout for improvised explosive devices, and BigDog, designed to assist troops in carrying heavy gear. Security robots include autonomous mobile systems such as Cobalt.

Self-Driving Cars. Robot-cars that can drive themselves.

Telepresence. Robots that help you to be in a particular place without you physically being there.

Humanoids. The robot that actually looks and act like a human. What most of them think a robot is 🙂

What are the different areas of expertise in robotic?

When you explain robotics to kids, another essential thing to understand in the area of robotics, now that you know the different types of robots, robotic engineers expertise is another crucial point.

Teamwork is the key when it comes to working in robotics. Different teams might focus on work in the following field of expertise:

Operator Interface: deciding on the way human and robot communicate. Buttons, screens, joysticks, voice and sight ate just a few typical examples of what shape can an interface take.

Mobility or Locomotion: mobility of the robot (aka locomotion). Decisions about the way robots move around is how the robot gets from place to place.

Manipulators and Effectors: THow robot interacts with other things. Does it use claws, pushers, and mechanical arms and fingers? Does it touch, pick up, spray paint, brush, drills te list is endless.

Programming: Programming the robot to communicate, to search to adapt. 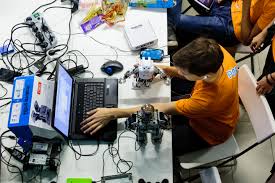 The benefits of robotics into the classroom learning?

By teaching robotics to the primary school children, better technical knowledge and modern technical skills can be instilled with ease. It’s crucial to render the foundation strong if the goal is to obtain a proficient child. Hence, basic information about robotics is quintessential to make them flourish in the future.

Many countries have already realized the vitality of this subject and included the same in the curriculum of primary kids. The students are taught the basics of programming, robotics and other technical skills. Not only does it help in making them future-ready, but also builds a sense of confidence and superiority in their minds. Overall, robotics is the best futuristic subject to enable primary school children with immense technical knowledge and experience:

– The students can learn about programming from the very beginning. Programming has a great role in the future-friendly technical aspects and almost every venture requires it. Hence, kids would be an asset to the future if taught programming in primary school.

– Robotics also helps in ameliorating the innovative and creative ideology of the students. The subject makes them think out of the box to create something unique, different and logical. All this thinking renders the kids with a positive outlook.

– Without any doubt, jobs in the computer or software related sector are flourishing astonishingly. Hence, it would be a benefit to prepare them for the future beforehand by teaching robotics. Not only does it provide more skills, but also builds a better future for the kids.

– Robotics is the best way possible to transform frustration into innovation. With the help of robotics, the kids can get rid of their frustration and actually make something logical out of it. 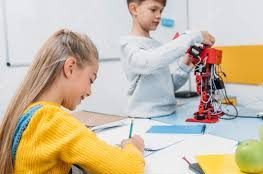 How to explain robotics to kids in the classroom?

Schools lag behind as far as the matter of instilling a futuristic subject like robotics is concerned. If you want to explain robotics to kids in the classroom the best way is t get them to experience it. With better workshops at relevant places, students can get a fair idea about robotics and even learn to apply the knowledge. The workshops compensate for the deficiency of futuristic knowledge amongst the kids.